Costly Mistakes to Avoid When Building a Deck

Many people are usually confident about building their own deck. However, more and more people are injured, and others hit with regret, each year due to faults they've made when timber decking. Timber decking can really boost your home's value, but blunders would make your money go down the drain. Mistakes occur for a variety of reasons, ranging from inadequate knowledge to trying to cut corners. So if you're planning on building your own deck, here are some of the most costly mistakes you should avoid.

Not properly connecting the deck to the house

When connecting it, avoid using nails: go for through bolts or even galvanized lag screws. These screws will give better and long lasting connection of the deck joists and house band joists. In addition, they are also able to resist the expansion and contraction of wood.

Another grave mistake is not considering that rotting and wood are really fond of each other. That's why you need to avoid placing your posts deep directly in concrete. The reason is simple. Concrete is porous and holds quite a bit of moisture. Keeping it in contact with your posts simply means that the moisture will slowly penetrate the wood and completely destroy it over time.

As an alternative, you can use post stirrups. These are anchors that are used to mount the posts into the concrete or bolted against existing concrete.

This mistake is normally the result of inadequate planning. Having a poor layout and using smaller board lengths results in a series of problems. First, you're definitely going to waste your boards, because the layout contributes greatly to the number of boards you'll need. That means you'll have to order for more boards, which will consequently cause you to exceed your planned budget. The installation would also take much longer.

So before you start your decking, just plan. Think carefully about the layout. You'll have to make calculations on the width of your bearers, post spacing along with the joist sizes. You can hire professionals to do this work for you. That way, you'll be sure about the material you're going to use. 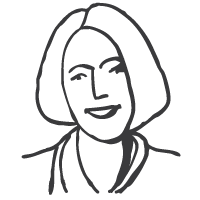 Yo! My name is Lisa and I would like to welcome all you guys to my new blog. I was inspired to start this blog because I am tired of visiting people's homes and seeing the same old furniture and the same old designs in use. I used to have boring designs in my home and garden. However, all that changed when my friend Simon came to visit. Simon is a designer and property developer so he has a real eye for bringing out the best in any space. He gave me some top tips and helped me to transform my home and garden.